Can you eat high carb foods on a low carb diet?

So this was meant to be a short post but apparently I don’t know how to write one of those. Sorry about that….😂

Anyhoo, on the interwebs any day of the week, you’ll see some outlandish claims being made. Just last week I read a post about someone believing carrots were too high in carbs/sugar and would prevent weight loss. I also distinctly remember Ashy Bines telling everyone that lettuce had too much sugar in it and should be avoided (although she trumped this more recently by claiming keto shut down the Kreb’s cycle – but in a good way of course!🤪). Over the years, I’ve had emails asking about nightshades, peas, carrots and a whole host of other veggies and people stressing over the inclusion of them in a low carb diet. I can’t help but feel like this hysteria borders on disordered eating and it’s not the fault of the inquirer but rather the fault of the people pushing this ridiculous information.

So, I would say that this is probably  one of the most frustrating issues I’ve dealt with over the years and one that has probably caused the most amount of people to give up on low carb or not bother getting started with it at all!

Quick disclaimer…. there are a few groups of people who should steer clear of high carb foods but this would be for medical reasons only. Outside of this, avoiding all high-higher carb foods is usually unnecessary and overly restrictive.

So for those of you that are still reading this and still with me, this is what you need to consider when following a low carb diet.

1. An energy deficit is needed for weight loss

There is no other known way to lose weight outside of creating an energy deficit. When you create this energy deficit, the body taps into stored energy (i.e. body fat) and breaks it down and uses it as a source of energy. This process is called lipolysis. When it comes to a low carb diet, there are some favourable aspects of this way of eating in regards to encouraging lipolysis. Firstly, a low carb diet significantly lowers insulin, and insulin inhibits lipolysis. Therefore, if a person is overweight and insulin resistant, lowering insulin will encourage fat burning (so long as an energy deficit is present). It’s important to add here that simply by restricting energy will ultimately product the same outcome; it’s just that energy restriction is a lot harder to stick to. Secondly, the protein content of a low carb diet keeps you full for longer periods of time. This ultimately reduces the amount of food you’re eating (i.e. lowering energy intake). The lower carb content of the diet also encourages the production of ketones, which possibly have an appetite suppressive action. Furthermore, not having the blood glucose rollercoaster also has favourable outcomes on appetite which together, promote less eating. And lastly, most people following low carb naturally start to follow a fasting routine which also has the produces the same effect of lowering energy intake. Ultimately though, it is the energy reduction resulting form the low carb diet that promotes the weight loss and not something inherently magical about low carb diet itself.

2. Not every meal has to be low carb

This myth is incredibly pervasive and really quite destructive when you think about the consequences of trying to be low carb every single meal. In doing this, it makes low carb quite strict and difficult to stick to. Whilst in some cases it could be necessary, it’s more likely that it’s an unnecessary burden and a major contributing factor to people getting anxious around food, developing disordered eating and ultimately giving up. This type of restriction also tends to lead to people creating low carb versions of everything (and I mean everything). I’ve seen low carb donuts, cakes, muffins, pancakes, pizzas, waffles, bread, rice, pasta etc. and whilst these are great for people who do need to be strict low carb, it often lulls people into a false sense of security that they’re eating healthy food. But when we take a little squiz at the nutritional profile of these low carb treats, they are often very high in energy, very high in omega 6 fats and nutrient deficient due to the high fat content (the higher the fat content of a food, the lower the nutrient density, generally speaking). My personal preference is to have the real deal when it comes to desserts or high carb foods, and just not have them all the time.

When it comes to low carb, what it means from person to person will vary. My personal low carb diet is mostly about not eating much in the way of grain-based foods due to having IBS (once upon a time). I find grains highly irritating to my gut and they produce incredible bloating (and other IBS-related symptoms that I don’t need to tell you about haha). So the avoidance of these foods made sense of course. I also switched to full-fat dairy products and stopped eating seed oils. However, I didn’t track my carbs I just ate fruit and veg as my carb source and got wonderful results. But this may not work fro everyone. For other people, they will stick to a certain volume of carbs and others will do this and only eat low carb foods. It varies from person to person and will ultimately depend on their goals, preferences and beliefs around food.

In regards to defining a low carb diet, these are my general guidelines:

I have seen people get wonderful results at all levels of low carb so just remember that weight loss is ultimately about energy deficits (and not simply carb restriction).

4. There are no good or bad foods

Ever been told that sugar is toxic or poisonous? Not only is this kind of language emotionally manipulative and confusing, it’s also scientifically incorrect. When it comes to toxins and poisons, nothing is toxic below its toxic dose and everything is toxic above its toxic dose. Water is one of the best examples of this. We all know how important water is and how crucial it is to survival, yet if you drink too much of it (in combination with excessive sweating) you’re able to kill yourself. This is called hyponatraemia. So the next time you’re thinking about having some ice-cream or something with sugar in it, think about how much you’ve had over the last week or two and if you haven’t had a lot, enjoy that treat with every fibre of your being!

5. You need a workable, long-term plan

Are you willing to avoid every higher carb food forever? Are you willing to say goodbye to donuts, cakes, ice-cream, bread, pasta etc. forever? If the answer is no, then you need to start figuring out how you can include them now and still achieve your goals. One of the biggest reasons people don’t stick with their diet long-term is because they overly restrict and “fall off the bandwagon”. I think a lot less people would be coming off the bandwagon if the bandwagon included some delicious soul food every now and then, don’t you think? At the end of the day, there is no research suggesting that dietary perfection is necessary for weight loss and we know that overly restricting a diet often produces low adherence. So my suggestion to you, is figure out how to include the foods you love whilst working towards your goals.

And to show you the practical application of this, below is a sample, single day meal plan that demonstrates how you can include some high carb soul food, and still meet nutritional targets. 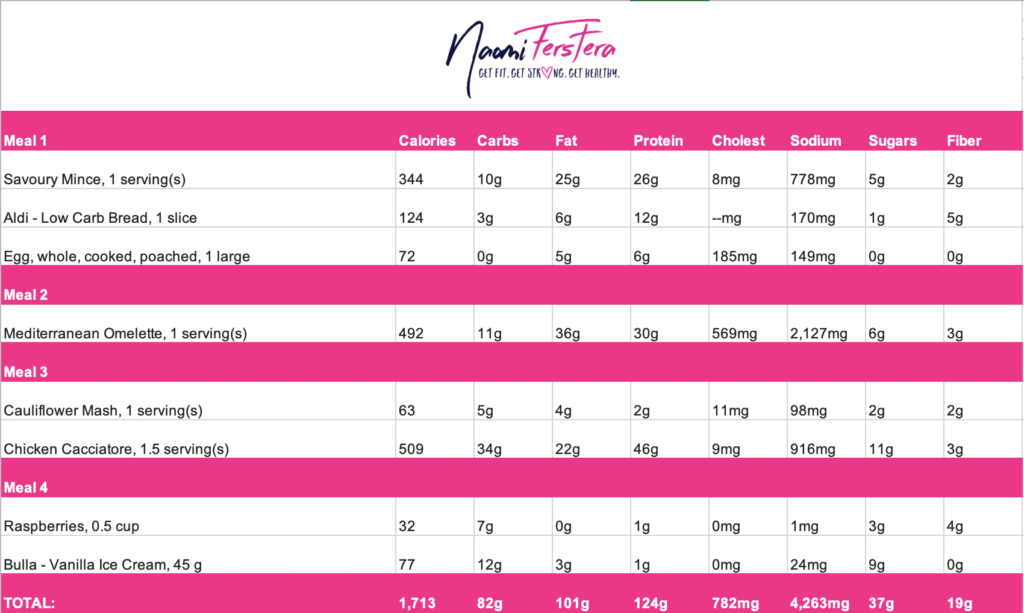 Want up to date health and fitness information?

We'll send you fad-free, evidence-based information to your inbox, each week!

Why you’re not losing weight on your 1200 calorie diet

Thank you for downloading our free recipe PDF! Click on the button below and the PDF will open in a new window. We hope you enjoy the recipes as much as our family does (almost as much as they enjoy family photos haha).

My Facebook page is where I share a lot of great content around the latest research on all things health and fitness; especially on things to with healthy brain ageing.

My Instagram account is definitely fitness and food focused and if you ever take a look at my stories, you'll see what sort of sense of humour I have 😉

My YouTube account is where I will be vlogging on all things stupid and ridiculous in the the health and fitness industry. If you don't like sarcasm, this may not be the place for you....😉

Naomi started Alpha Fitness and Education in 2012 after the birth of her twin daughters Alexa and Sarai. She began the company with the intention of being able to work from home whilst being a full-time mum. With the arrival of her fourth child only 18 months later, life certainly became a little more challenging but Naomi was able to grow her business, with her incredible sister, to include the Eat Fat Get Fit Program and other health and fitness products. To read our full story, head here

The Naomi Ferstera Group now offers services to both the general public and professional health sector.  We offer:

Not interested in a challenge but just want to keep training? We have you covered! For as little as $5.95/week you can have an ongoing exercise program delivered to your phone via our app.

We run regular 8 week challenges where you can compete against yourself, a team mate or the group and really give yourself the push you need!

Are you a health or fitness professional (EP, PT, GP, dietitian etc.) and want to run an online program but don't have the time or expertise to do it? We have you covered. Click here to find out more!